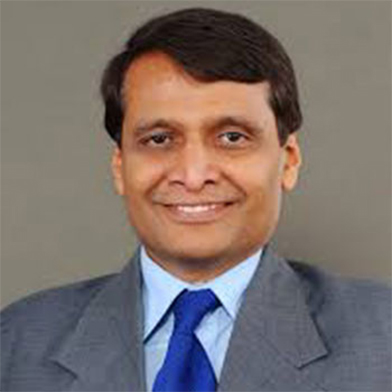 Shri Suresh Prabhu is a seasoned politician, able administrator, and a true visionary - all rolled into one. Known for his out-of-the-box thinking, Shri Prabhu has scripted several reforms across sectors, and effected organisational transformations. He is a Rajya Sabha MP from Andhra Pradesh and former Sherpa to G7 and G20 summits.

Shri Prabhu is the Founding Chancellor of Rishihood University, and a Guest Professor at London School of Economics.

As Union Minister of Commerce and Industry (2017-2019), Shri Prabhu drove policies which helped India register highest ever exports (US $330 bn), besides initiating the development of India's first ever National e-Commerce Policy. As Union Minister for Civil Aviation (2017-2019), Shri Prabhu was instrumental in the release of India's first ever National Air Cargo Policy and National Green Aviation Policy. During his tenure as the Union Minister for Railways (2014-2017), he introduced real-time customer complaint resolution mechanism on social media and a host of other customer-friendly measures such as e-catering, water vending and automatic ticket vending machines, besides diversifying Railways' energy consumption basket to include renewables. As Union Minister for Power (2000-2002), Fertilisers and Chemicals (1999-2000), and Environment and Forests (1998-1999) too, he drove decisions that had far-reaching impacts.

Shri Prabhu has made strategic thinking a part of public policy development and implementation and has mainstreamed the issue of sustainable development. His policies have focused on a wide range of subjects including water, renewables, rural development, transportation, etc. His engagements with international forums such as Asia Energy Foundation (Chairman), Global Water Partnership (South Asia Chair), and Global Foundation of Farmers (Chairman) bear testimony to his management skills.

Shri Prabhu's interests vary from classical music and sports to drama and philately. A Chartered Accountant by profession, he is currently pursuing PhD in Climate Change Issues in Relation to Energy and Environment from Frei University, Berlin, and State Public Finance from Mumbai University.