The chapter discusses the three distinct themes of the largest set of projects in SERIIUS.

First is the development of new low-capital thin-film photovoltaic (PV) technologies by high-throughput manufacturing processes with a focus on solution-based roll-to-roll processing. This effort was highly integrated with the development of thin glass substrates and packaging from Corning, and focused on absorbers made from CuInGaSe2, CuZnSnSeS, organic molecules such as fluorinated polymers, perovskite solar cells based on methyl ammonium lead iodide (MAPbI), and silicon. Significant progress, including world-record devices, was achieved in a number of areas, and substantial improvements in lifetime were attained. Second is an assessment of the stability and failure mechanisms of PV in hot/dry and hot/wet climates. This work included assessing PV module stability across the seven climate zones of India and in the United States. The importance of dust and particulates was assessed. New failure mechanisms were identified, in particular to the hot/dry and hot/wet climates, and an international working group was convened. Coupled to developing new PV technology and understanding degradation pathways, an effort was made in multiscale modeling - from atoms to modules - to begin to connect the basic science to the ultimate deployability of the PV devices and modules. Here, the potential importance of bifacial modules was assessed. 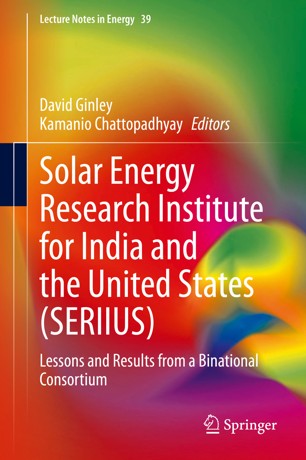